Bonners Ferry turned out by the crowds tonight to watch the Lady Badgers on the District playoffs at Bonners Ferry High School… and the Ladies did not disappoint.

The game opener, Jerzie Pluid tipped the ball, Kellogg retrieved, but it was intercepted quickly and Bonners Ferry was the first to put points up… twice right in a row. Then it was answered by Kellogg with a score of 4 to 2 Badgers.

In typical Lady Badger fashion, there were plenty of three-pointers made, several breakaway layup opportunities, and back to back foul shots on both sides.

The teams kept the referees hopping and running as the first quarter came to an end with a score of 14 to 11 Badgers.

The pace didn’t slow a bit in the second quarter.

Badgers got the ball, played good passes and finally over to Ansley who jumped and shot, another three-pointer, and another to Baylee Blackmore who was ringing in the free throws. As with the first quarter, there were plenty of foul shots, even more scoring and a ton of crowd participation.

And, the BFHS cheerleaders kept the crowd engaged in cheering on the Lady Badgers.

At times it felt as if the referees might have been watching a different game than the rest of us at some of their clls. The crowd erupted with dissatisfaction at the call. But the Lady Badgers laughed it off and fought that much harder, leaving the score at halftime 32 to 17, Badgers.

Third quarter seemed to start off on the wrong foot as Kellogg was able to make a little comeback, but the Lady Badgers weren’t going to have it. By the end of the third quarter, they had nearly doubled their lead on Kellogg for a score of 44 to 26.

At half time, the band played, then Badgerettes performed their new District routine for the Lyrical category, followed by additional cheers and music from the band, and one Wildcat cheerleader who sprang into flips across the court to encourage her team while the rest cheered the sideline with her.

In the final three minutes of the game, Badgers had brought the score to 54 to 35, and the crowd, feeling confident that we had won the game, began chanting “On to State, On to State”, and at a minute thirty, “We believe that we will Win.” and they did. The Badgers put two more baskets up to finish the night with a score of 58 to 35.

At the end of the game, Badgers were announced as the 2nd place winners for the Intermountain League. The Lady Badgers are headed to State! 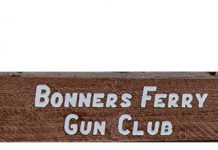 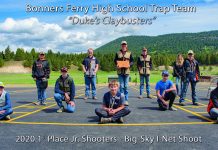