Pam and Dennis Ponsness’ maggot farm may not smell like a bouquet of roses.

But the Porthill company that might rank as the one of the smelliest businesses on the planet for raising millions of maggots since 1989 is headed for the limelight of national TV.

The ‘Dirty Jobs’ camera crew spent July 1 filming the down-and-dirty business of maggot farming, including getting up-to-the-elbows in teams of groveling maggots.

Rowe – who has worked side-by-side with worm dung farmers, roadkill collectors and a sludge recycler – hung in there without batting an eye as he fed, scooped, gathered and packaged thousands of swarming maggots in the Ponsness’ 3,840-square foot processing plant that packs a near-suffocating odor of ammonia.

“They had a ball, at least I think they did,” said Pam. “Mike dug right in, grinding up fish parts, feeding the maggots and joking around. It was an exhausting 11-hour shoot, all very impromptu. If he wants, he might have a future as a maggot farmer.”

But Rowe will have to come a long way to top the Ponsnesses, who are arguably the largest producers of fresh bait maggots and suppliers to the disposable crop pollinator market on the continent. They have been shipping millions of bluebottle fly larvae to USDA research stations and seed farmers for two decades as well maggots to fish bait distributors.

“When we first got going, we thought shipping out 100,000 a week was enormous,” said Pam. “Now we can ship 3-4 million each week through Fed Ex. We have the ability to raise a lot of maggots in a controlled environment.”

“A lot” translates into five million maggots in growing rooms, along with 2.8 million in incubators.

Raising enormous quantities of maggots has turned into such a full-blown lucrative business that ‘Dirty Jobs’ couldn’t wait to send its camera crew to the last driveway in Porthill before the highway hits the Canadian border.

“They had originally called and said they were coming in January, but for one reason or another, it didn’t work out,” said Pam, who gave up selling perfumes and lotions as a cosmetics dealer for raising maggots.

Then there is the Hollywood side of the Ponsness’ maggot business.

“We sold thousands of them to shows like CSI, Medical Investigation, crime movies, a National Geographic series, Sunday Morning, even to a Florida courtroom where a medical malpractice case was being tried,” said Pam.

For three months, they also shipped 50,000 pupae a week to the Brooklyn Museum of Art for a controversial display of modern art.

“When he saw our maggots on TV, Dennis called out, ‘Hey, there are our babies,'” she said.

Stardom is fine, but it’s no cakewalk tending an enormous maggot farm, especially one like
Forked Tree Ranch that has 15 tons of larvae in cold storage.

With a voracious appetite that needs to be fed every 12 hours, the Ponsnesses and one employee are constantly shoveling buckets of a ground fish parts into trays of ravenous little maggots.

Then there’s the smell, an odor so pervasive and overwhelming it could wilt the tulips and come close to raising the dead.

“When we were first starting out, it smelled so awful around here the kids wouldn’t bring anyone over,” said Dennis. “It can cut through everything and gets right down into your undershorts. But you get used to it. Actually, it doesn’t really seem so bad anymore.”

Even though orders are constantly emailed, faxed and phoned in from practically everywhere, the couple isn’t stopping with maggots.

They have their eyes on worms.

“It’s down the road a bit, but we have enough fertilizer here to raise another type of comparison bait,” said Dennis. “There’s a big, big market out there for worms. I suppose if I can get a little obsessive over maggots, I could get just as carried away growing worms.” 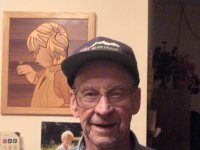